As Japan is having the national holiday week “Golden Week”, it’s time to BBQ!!! 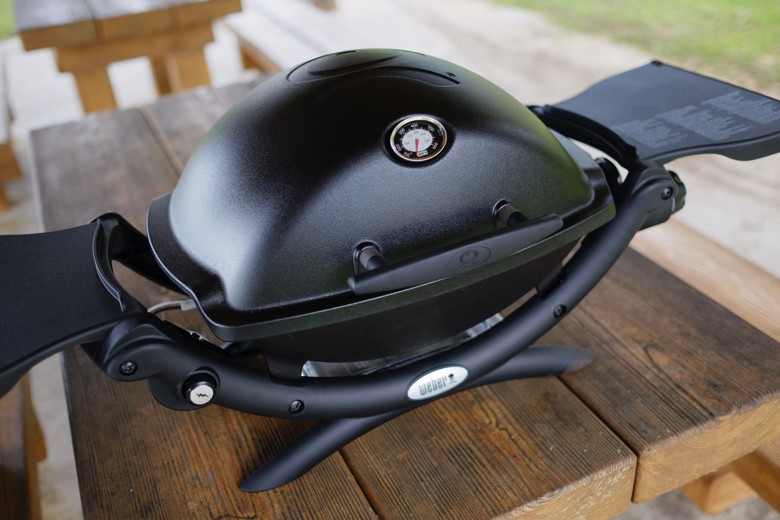 It has been a year since I bought Weber Baby Q grill and Anova Sous Vide.  I’ve been learning and experimenting with these toys.  It’s very fortunate I have friends who want to pay to come for my cooking, so I can play some more. 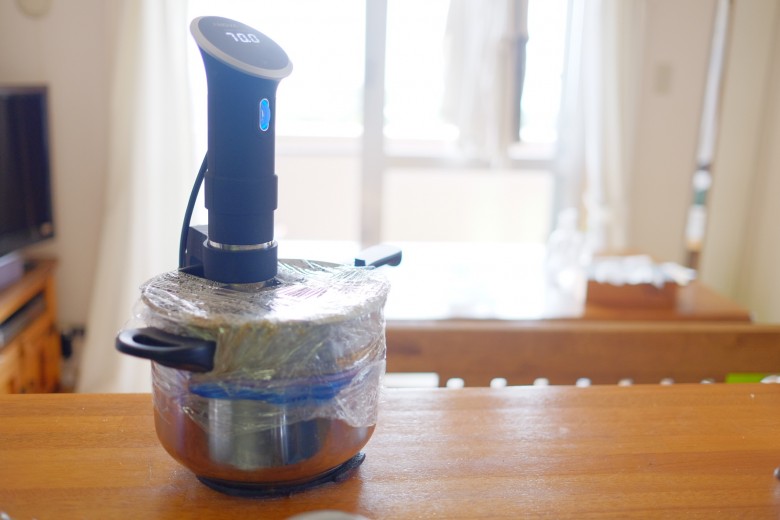 Sous Vide cooking takes more time, slow cooking.  But you can set it and walk away.  And you will never overcook.  That is the beauty about it.

I have tried pork chops in different temperatures, 60C, 62C and 65C.  My conclusion is that I like 62C the best.

Good thing about using sous vide for BBQ is that you can do the work a day before (or a few days before when you have time), and you can avoid hustle in the BBQ day and the food will still be perfectly cooked.

Season the meat with salt and pepper.  Olive oil, crushed garlic and rosemary, all go in the ziplock bag.
Put the bag into the 62C water slowly in a way the air will come out of the bag.  Let it bathe for 1 hour.

Put everything out of the bag, and put the meat back in the bag.  Get the air out of the bag by submerging once more, seal it, and store it in the fridge.
All the rest, the juice, garlic and rosemary from the bag go into a sauce pan.  Any fruits can join to make great sauce for pork but passion fruit happened to be in the season.  Throw in some juice into the sauce pan and reduce to your desired thickness, and strain.  Add seasoning to taste.  I added some agave syrup for sweetness. 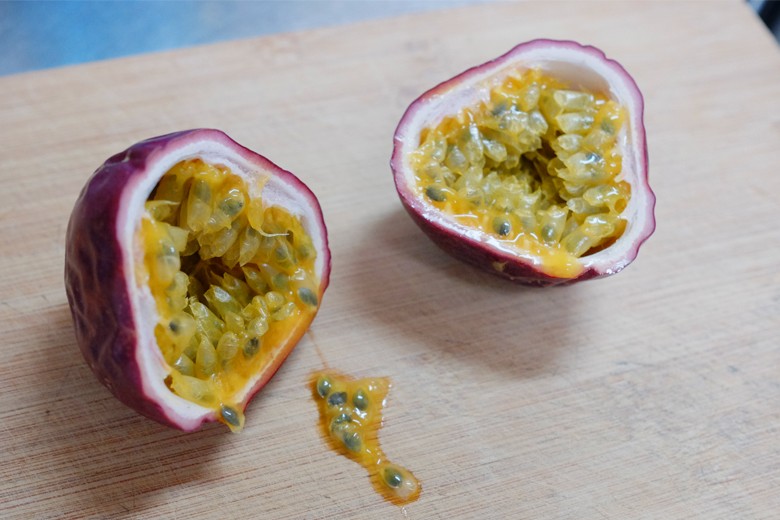 This can be done 1 – 3 days before BBQ.  And store in the fridge.  Everything will be ready on BBQ.

On the BBQ day, you just need to grill the outside to get that nice caramelization.  The only thing you worry about here is not to overcook in the finishing process.  The meat is already cooked through.  You just need to get the grill marks on.  But it has been sitting in the fridge, and the inside should be adequately heated, too, so that the fat contents will be melting to taste better.

For a block of meat, I put it out of the fridge in the morning, and reheat it in sous vide bath at the temperature below what you cooked it at, this time like 60C.  After an hour, wrap the bag with aluminum foil and bring it out to BBQ.
But this time the pork chops were cut in 3cm thick.  I assumed grilling would bring the internal temp high enough, so I just needed to have the meat at outside temperature when I cooked.  I took it out of the fridge to BBQ, no pre-heating, no-cooling. 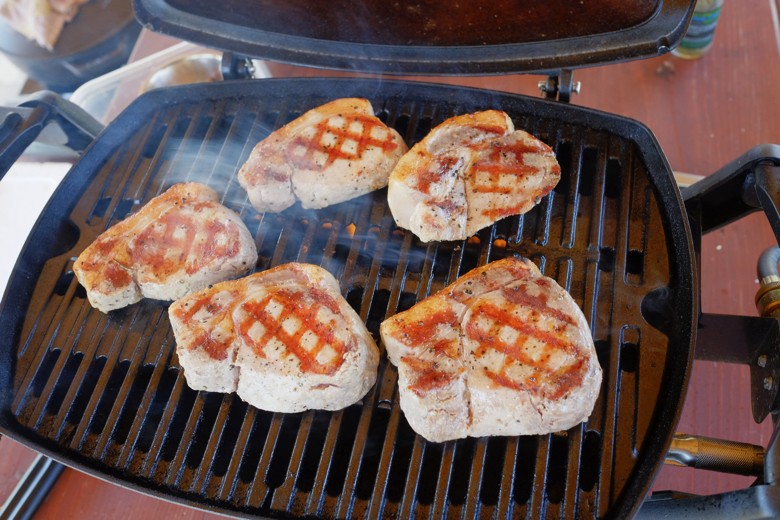 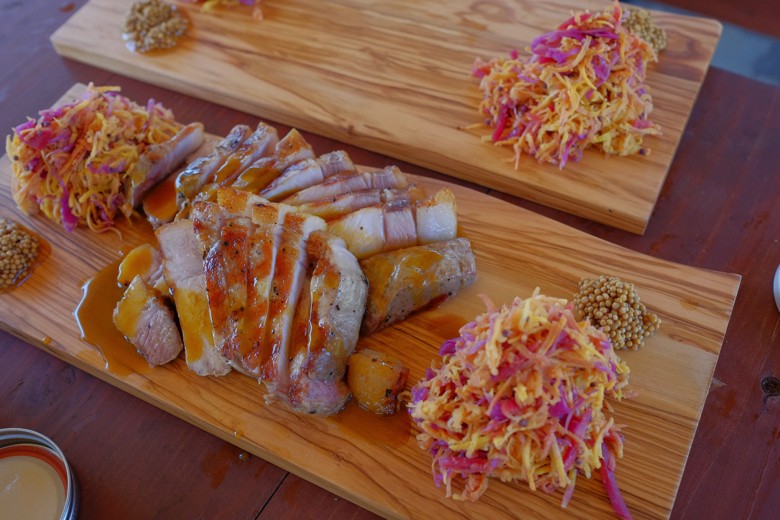 Everyone loves this potatoes. 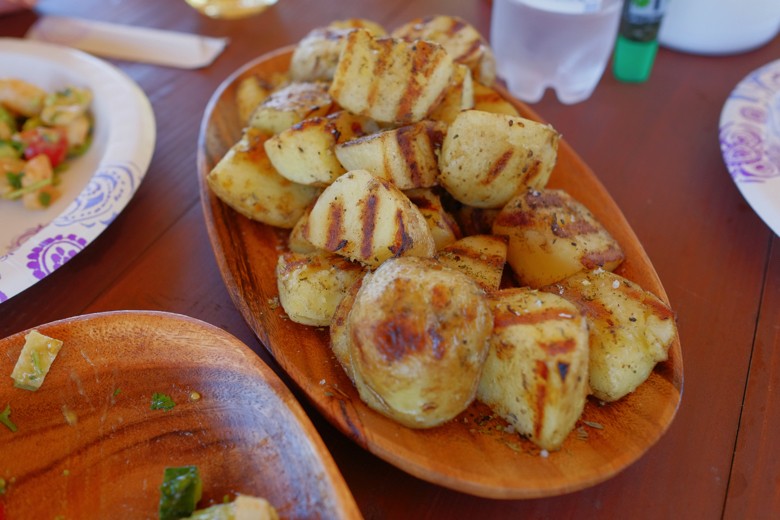 1Boil or steam potatoes.  I usually steam if I can.  I think steaming will keep the goodies in the potatoes.  But sometimes the quantity is bigger than my steamer.  This time I boiled it.  With about 1.5% salt and sugar of 1/2 amount of salt.  (2 liter of water, 30g salt, 15g sugar)  Simmer until fork tender.

Strain and let it cool.  Sprinkle over some onion pounder and olive oil.
Put it in the bag until BBQ day.

3 On the BBQ day, grill the potatoes!  The oil and the starch make it crisp.
Add some more oil, salt and herb to finish. 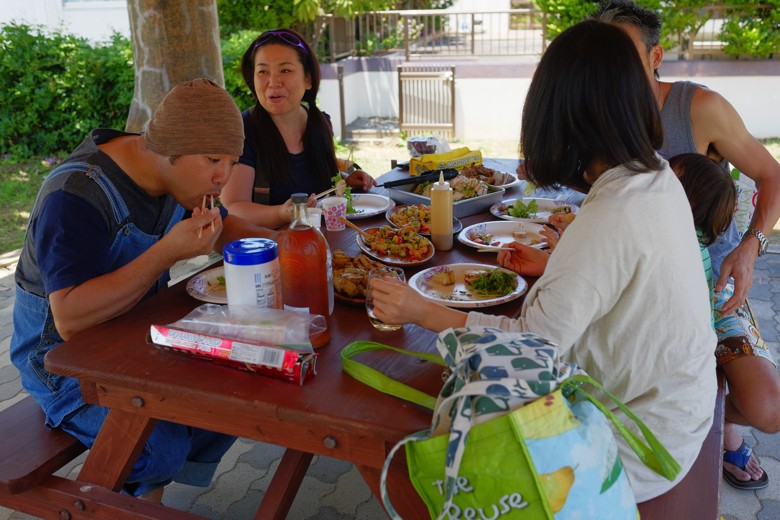 This is becoming one of my specials, even though I’m still exploring. 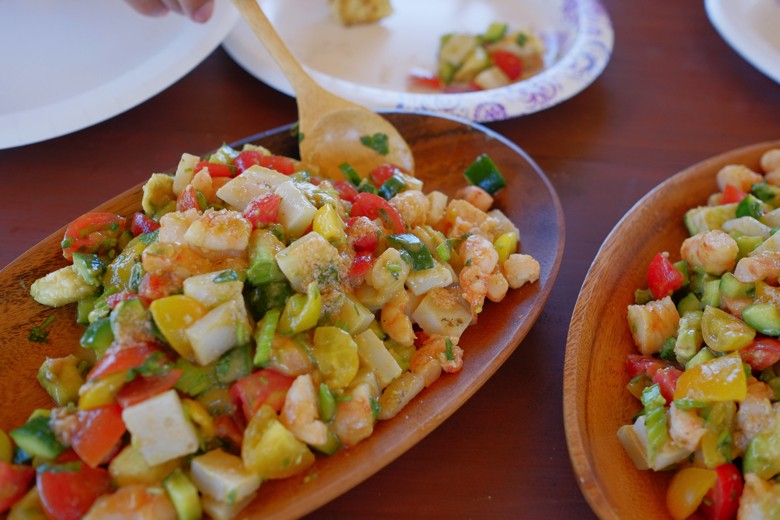 Prepare shrimps.  Okinawa is the top producer of Japanese Tiger Prawns.  And there’s a producer in my village.  I can get the freshly frozen prawns very cheap.  Take off the shells and heads, and keep them on the side.  Will need them for the sauce.
Remove the intestines with a toothpick.  Quick brine with salt and baking soda for about 20 minutes.  500ml of water, 15g salt and 30g baking soda.  It will give shrimps crisp, firm texture.

Sous vide 52C degrees for 15 minutes.  Put the shrimps in the bag with crushed garlic and butter.  I also had bigfin reef squid I caught and froze while fresh.  I threw it in the bath as well.  (the mantle, not the tentacles.  I knew that the squid was sashimi quality.)  After bath, cool down and the bag can go straight into the fridge until BBQ.  I like to grill it lightly before serve.

Pour some olive oil in a frying pan.  I use cast iron chinese frying pan.  Throw in the heads and shells with minced garlic and red pepper (without seed).  Put it on medium heat.  When you see the shells browning, pour some wine over and boil off alcohol.  Then you can throw in some vegetables like onions, carrots, celery, and tomatoes.  (You can take out the red pepper before that if you don’t like it hot.)  I often throw in some scraps and skins of vegetables I used for other stuffs.  If you don’t have vegetables, you can just add water.  Let it simmer for a while.

Strain.  I really crush the shrimp heads to get the juice out.  This is such precious sauce.
Put the sauce back in the pan and reduce a little more.  This will be a dressing for the seafood salad.  Season with salt, pepper, vinegar or citrus juice (I like apple cider vinegar), agave syrup or other sweetener, and herbs.  This seasoning is where I’m not decided.  There’s all kinds of flavors here, sour, sweet, spicy, salty.  You can also add buttery.  My friend chef advised me to emphasize on 2 taste factors in one dish.  I’m not set for which ones to go to.
By the way, you don’t want to keep the peeled shells in the fridge for long, it will quickly be oxidized.  You want to make the sauce right when you prepare shrimps.

On the BBQ, just lightly grill the shrimps and squids.  Be careful as they are quick to be cooked.  Mix them up with chopped vegetables like cucumber, avocado, tomatoes, celery, bell peppers or whatever you want.  Pour the dressing and a little olive oil over to finish! 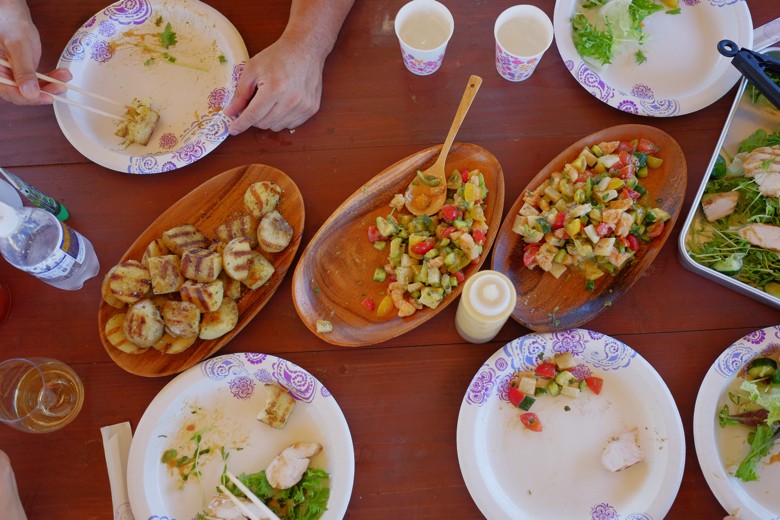 This is a pretty solid recipe for me. 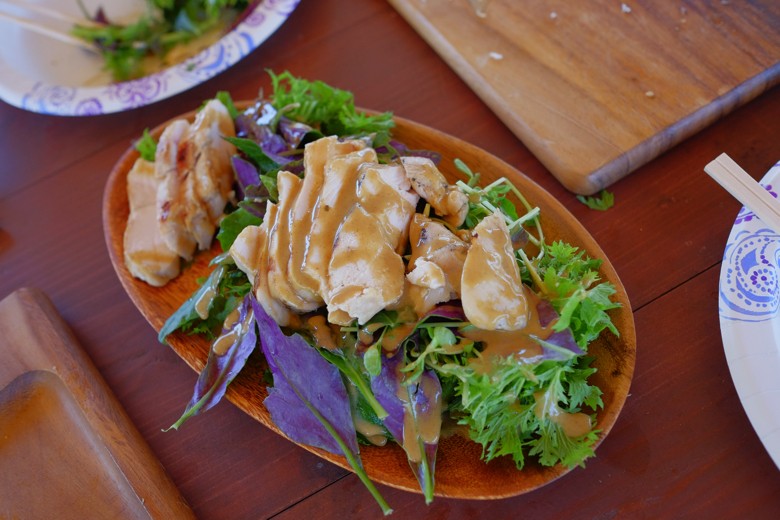 Sous vide chicken breast at 65C for 1 hour.
Season the chicken with salt and pepper.  Throw it in the bag with olive oil, crushed garlic, and rosemary.   The other aromatics I like is sesame oil, green onions, and ginger.  Submerge to get the air out and bathe in 65C for 1 hour.

Prepare the dressing.  I made mustard dressing this time.  Mix the same amount of apple cider vinegar and dijon mustard.  Add a little worcestershire sauce and cayenne pepper.

On the BBQ day, grill the chicken lightly.  Slice up and serve on the leaf salad with the dressing. 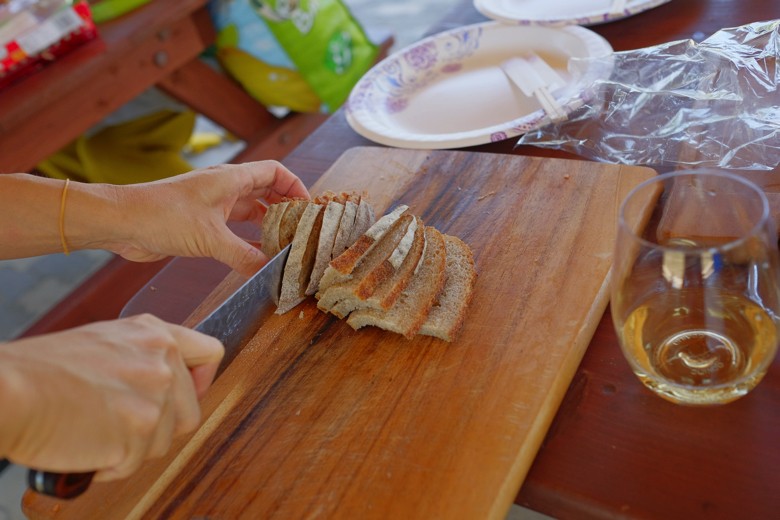 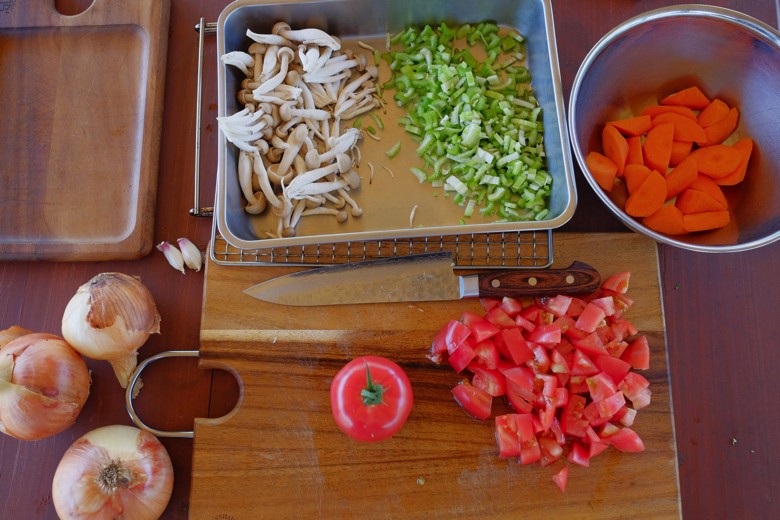 Recently I got another new toy.  Staub cast iron Braiser. 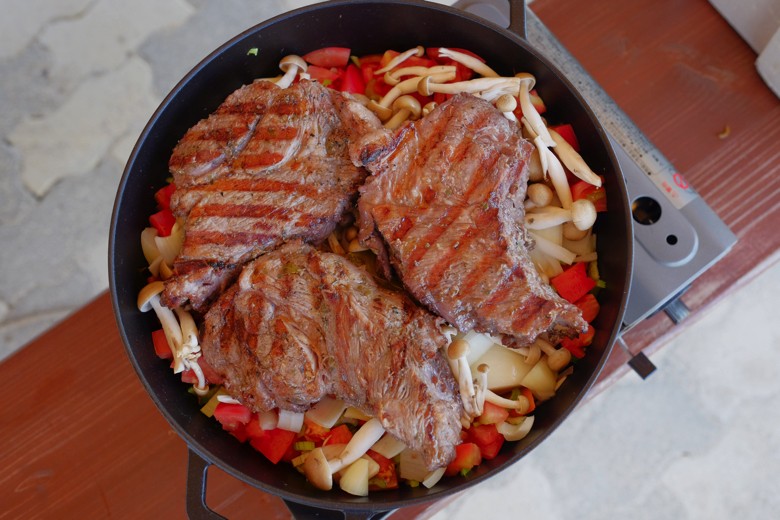 I cooked pork shoulders with it.  But I’m still exploring and I will write the recipe later when I’m more confident with it. 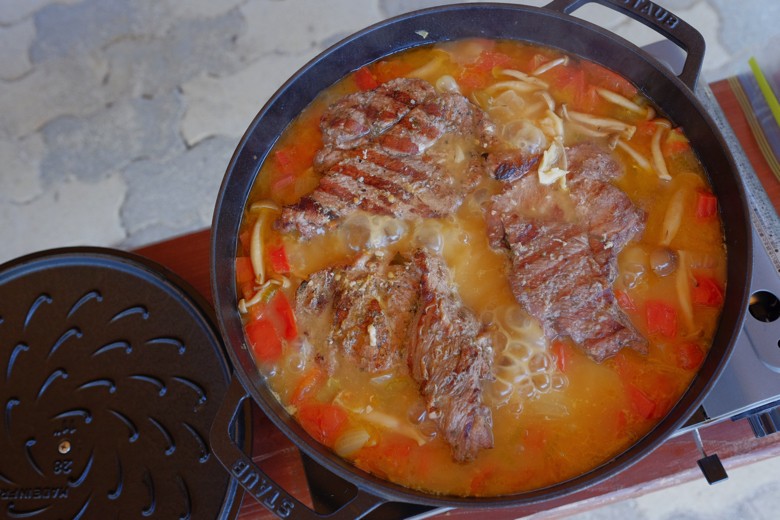 It happened to be delicious anyway!! 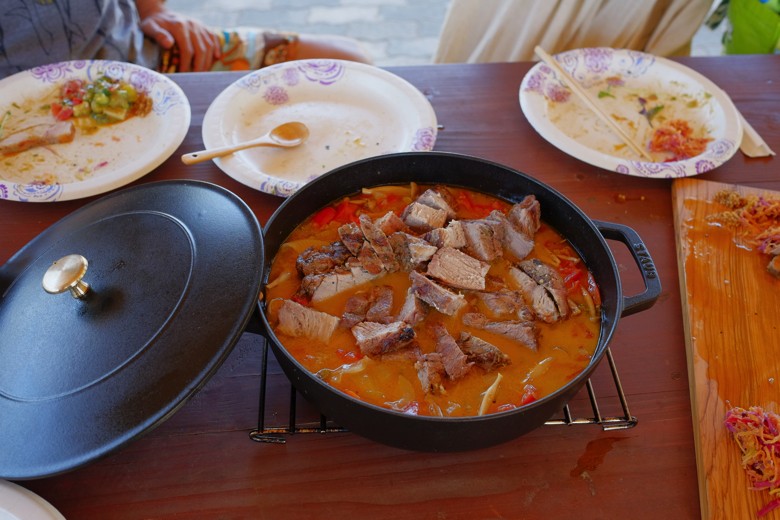