Did you try bluefin tuna yet?

Did you know all the fish markets in Okinawa are all stirred up by the seasonal arrival of this treasure fish right now?

You should go and get it for yourself as soon as possible because it will be around only for the next couple of weeks.  Then it will be gone.  And right now, this fish supply is so much in the balance of fish auction, it’s unbelievably cheap!  If you want to knock yourself out with the fatty tuna belly “Toro”, now is the time!!! 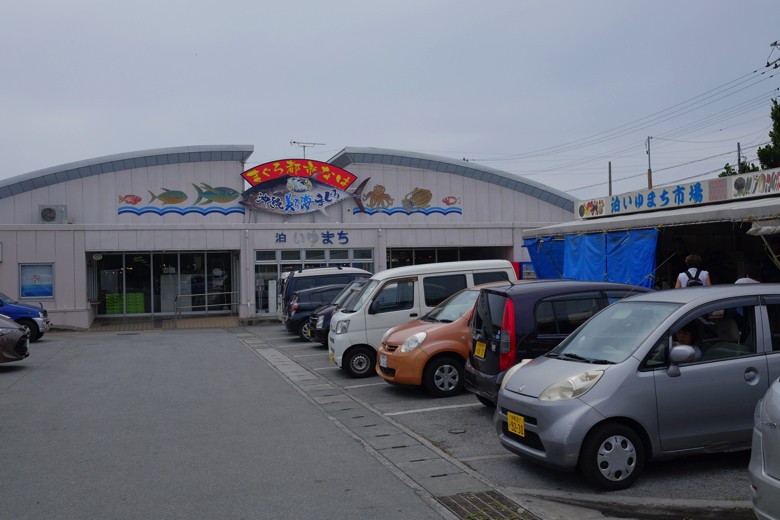 So we came to Tomari fish market in Naha.

I think you can get bluefin tuna at any major fish market in Okinawa now.  Makishi, Awase, or Itoman.  But this one hosts a lot of fish suppliers, price is cheap, not touristy, and local favorite. 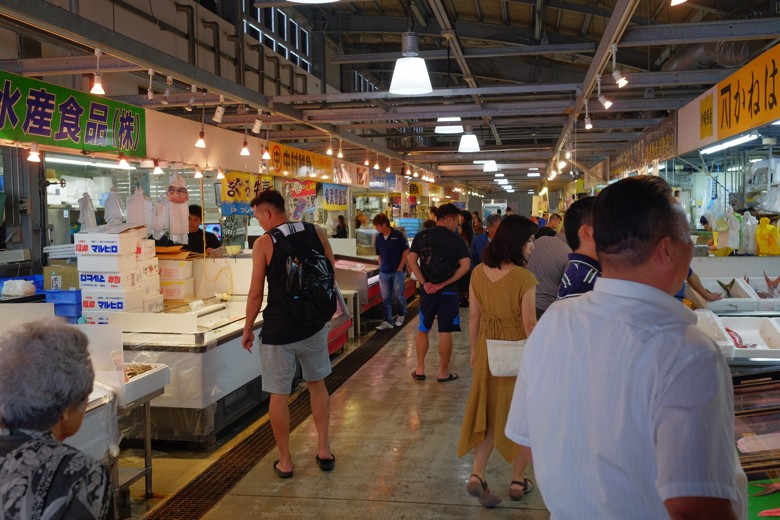 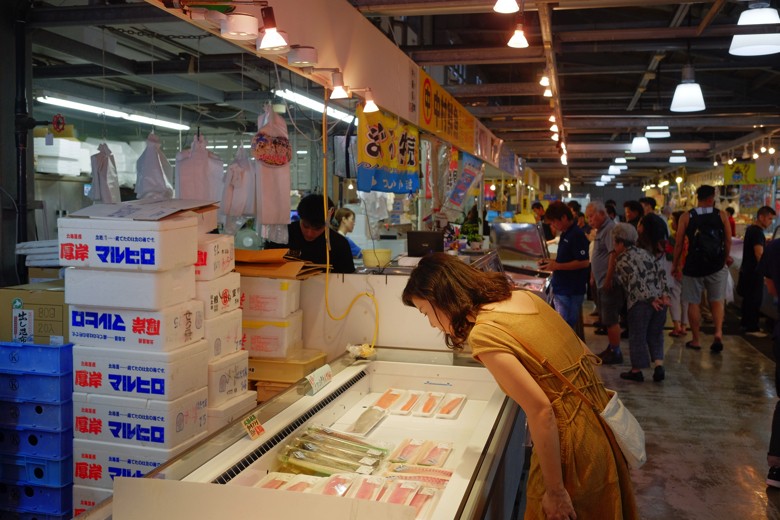 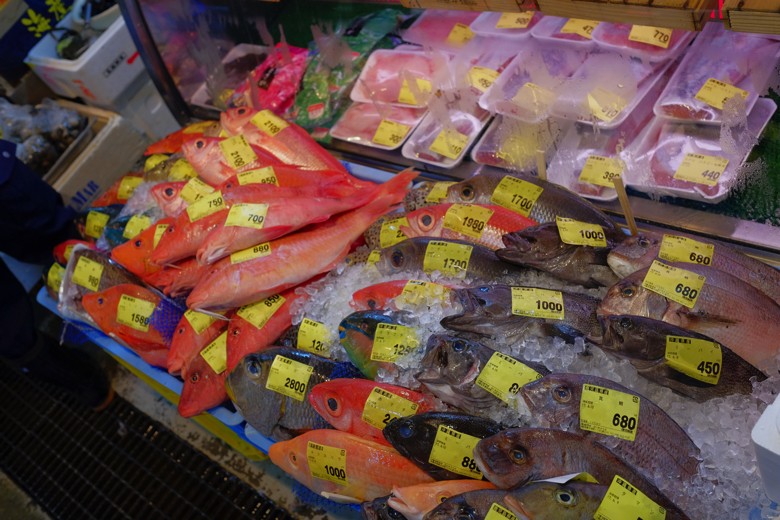 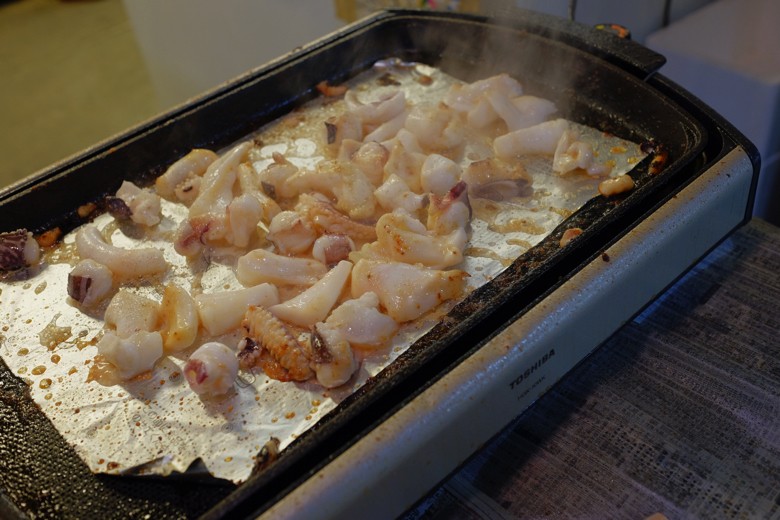 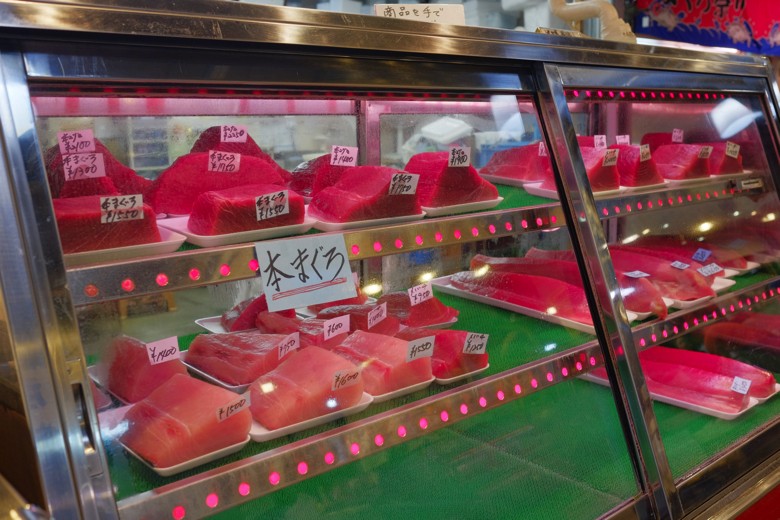 It’s the biggest species of all tunas in Japan.  The fish has “Toro”, the fatty belly part, that Japanese people love so much.

You can always find tuna in Okinawa through the year, but that tuna is a different species, called yellowfin tuna.  Yellowfin tuna has lean meat with much fresh flavor and has no Toro.  Blackfin is richer in taste and has much more meaty irony flavor.

Yellowfin stays around here mostly through the year, though the fishing season is summer.

Blackfin migrates to the north, passing through Okinawa only in May and June.  Now is the top season in Okinawa.  These fish can get away from the hooks here, make it all the way to the rich feeding ground in the north, and get caught around Hokkaido in the fall, ending up in Tokyo fish market and sold for as high price as a house.

But not that expensive in Okinawa.  And the catch is so concentrated right now and exceeds way over consumption capacity in Okinawa.  That is why you can get it so cheap. 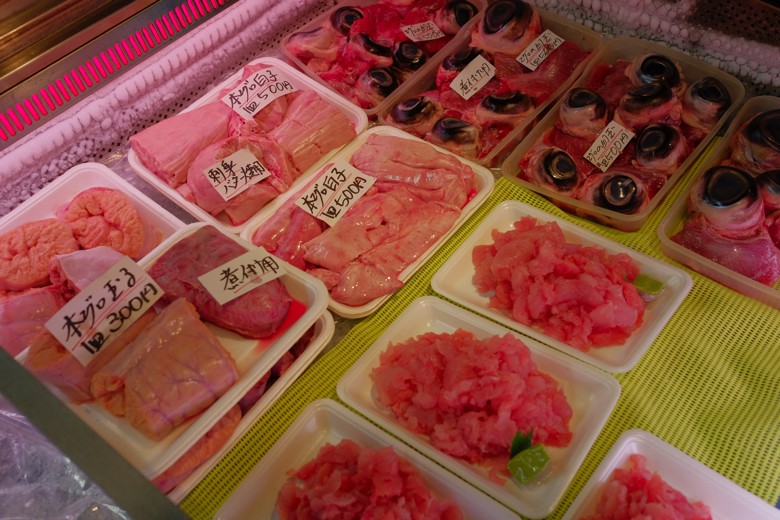 There are eggs and roe in so much volume for as little as JPY300 or JPY500.

You can see the eye balls too.  You can braise them in teri sauce.  It’s got a lot of meaty parts and so much good proteins, DHA and EPA.

What looks like ground meat is the scrapes off the bones.  Good for sashimi. 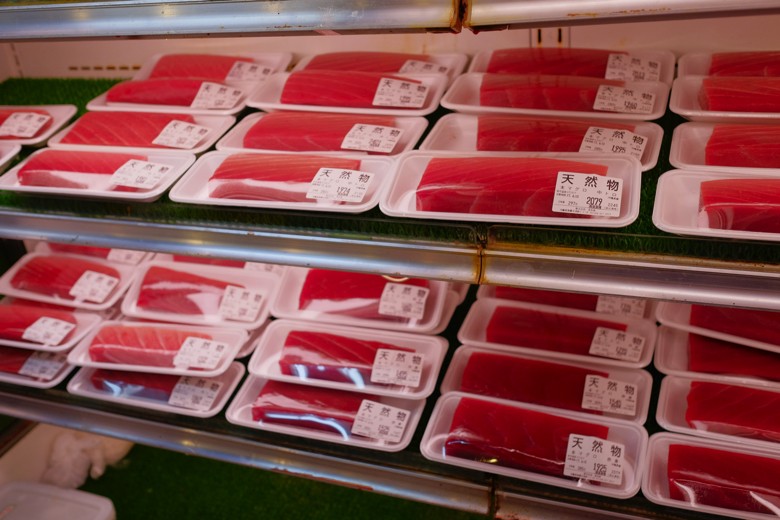 Just walk around the market.  There are so many fillet bars to choose from.  Follow your instinct and mark ones you like in your mind. 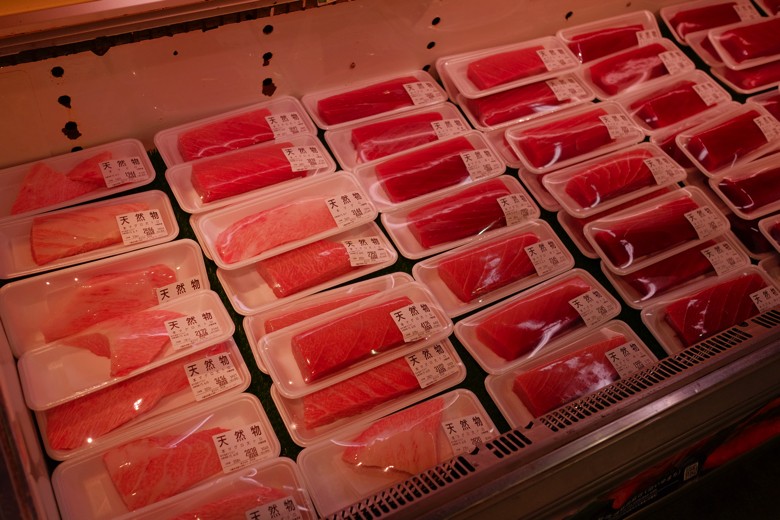 Bluefin tuna is classified into 3 categories. 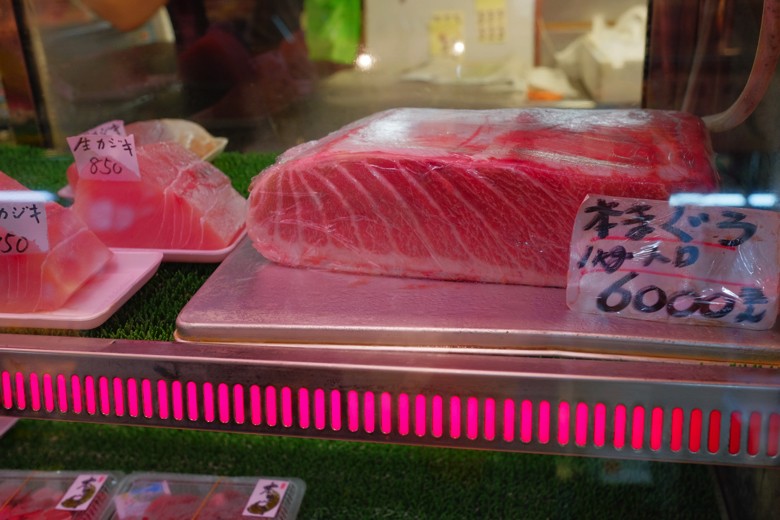 Grand Toro are the most rare part.  You can take 4 Medium Toro from one fish, you can only have 1 Grand Toro.  The most expensive. 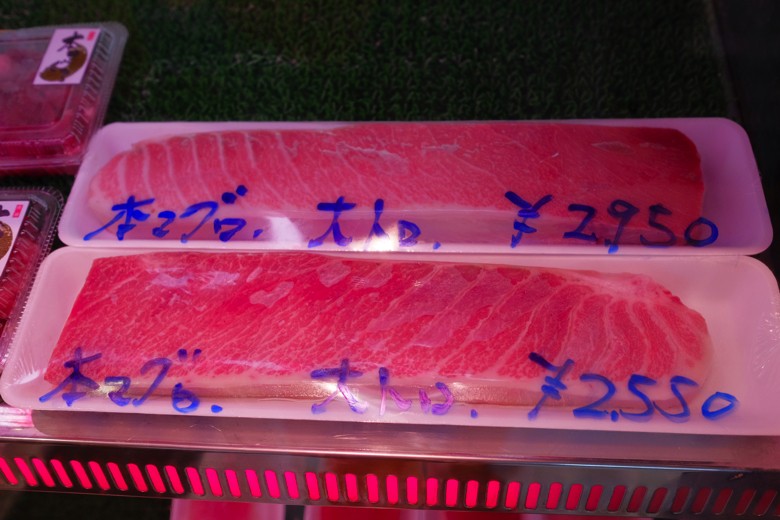 I’ve been to the fish market auction.  I never know how 2 identically looking fish can be priced so differently.  All the buyers have ways to value fish.  The most wanted is the most expensive.  Doesn’t mean it’s the most delicious.  They do auction each fish so each fish is priced differently.  When I look, I don’t just compare the prices.  I try to look for what I like. 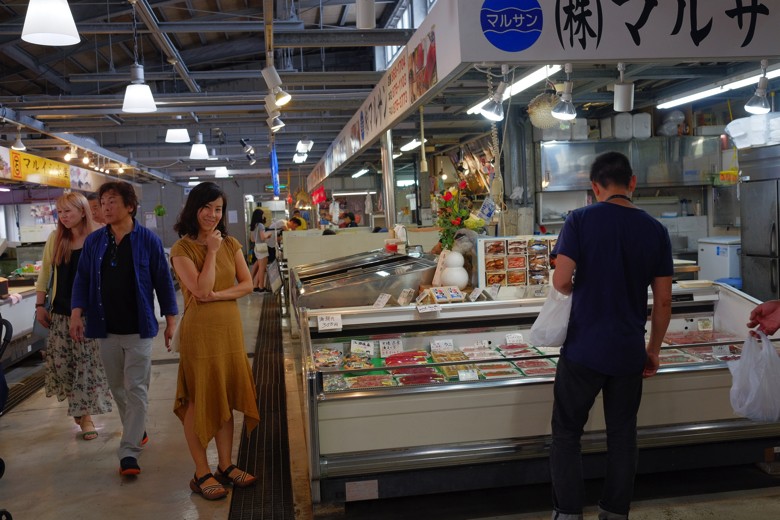 We don’t like too much fats like Grand Toro.  If we eat it, we would enjoy just a couple of slices.

We prefer red meat.  But this is such a limited time sale for bluefin tuna, we might as well look for something a little toward Medium Toro. 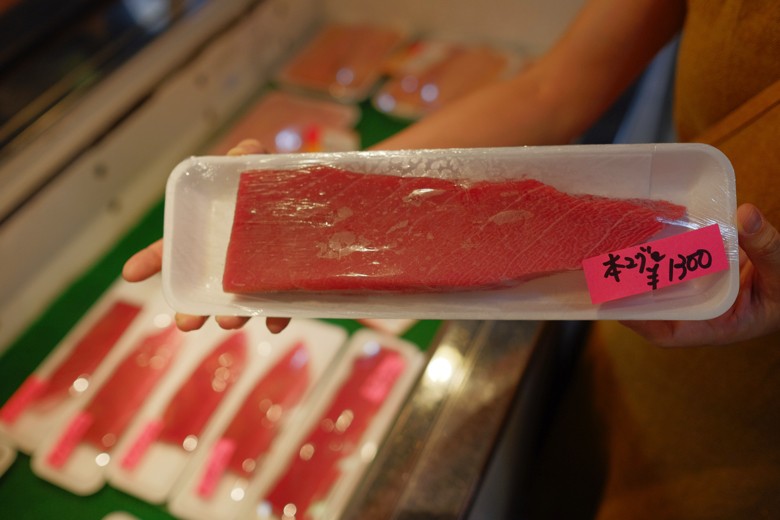 We found what we liked.  About 400g Medium Toro.  Beautiful fine marblings.  Like the reddish color too. 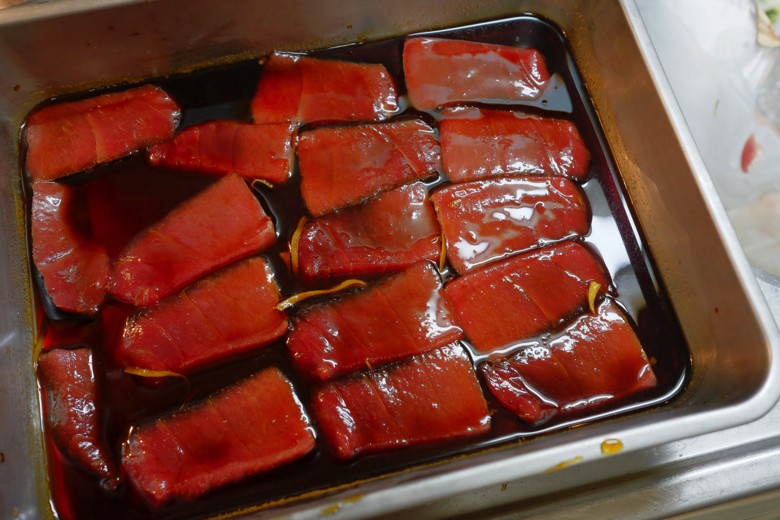 I marinated the half lightly only for 10 minutes just before serving. 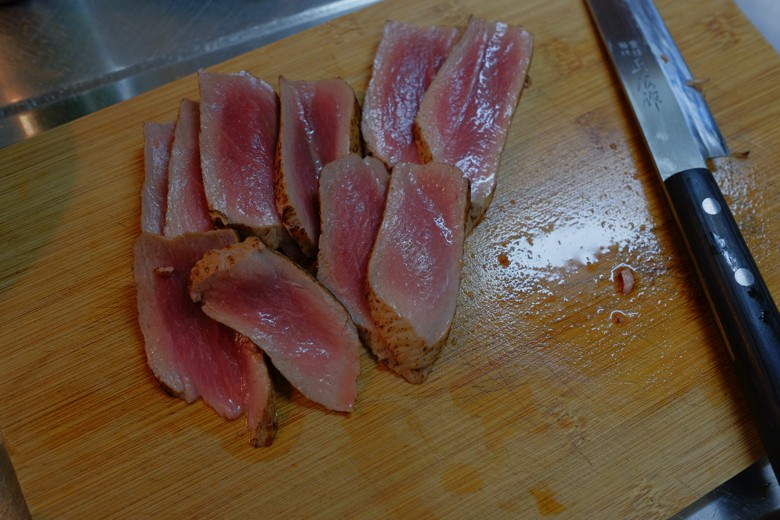 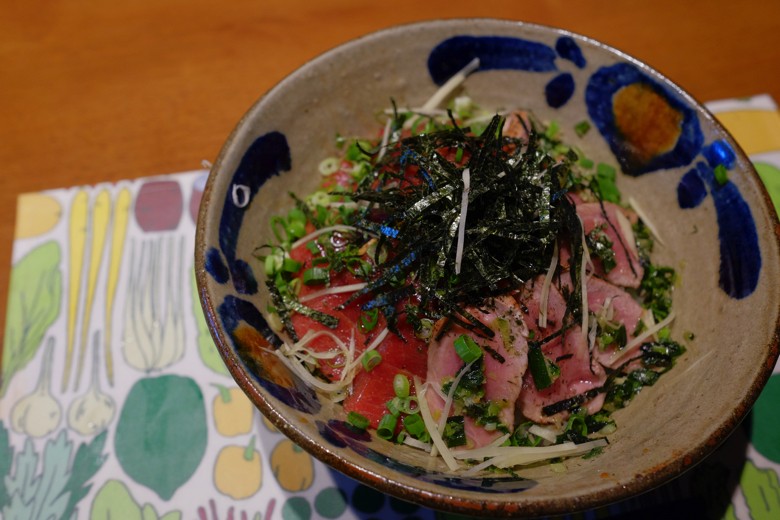 Put them on the rice!  Along with scallions, gingers, nori seaweed. 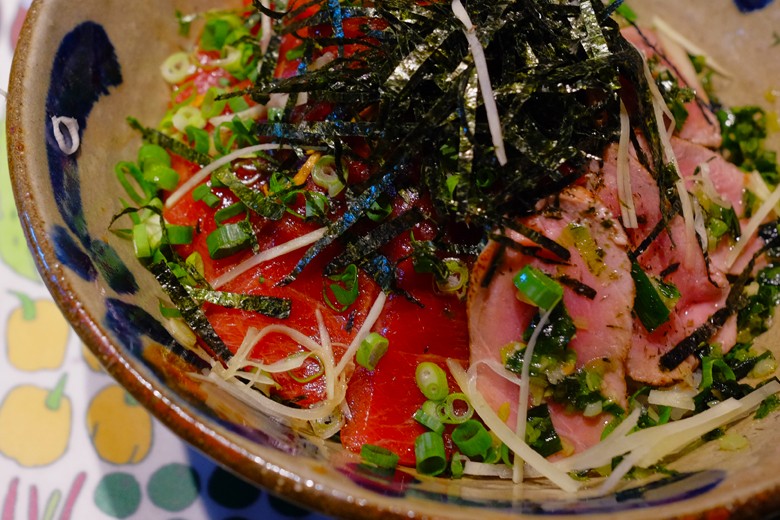 Grab your Toro!  Now is the time!